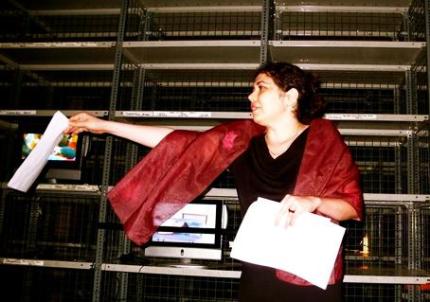 Roza El-Hassan,
performing during the opening of Recognise
on 22nd of June 2007

"...The main subject of my work was the experience of living with an Arab name in Europe. It is somewhat about the projections one experiences in Europe while living with Arab identity in Hungary, or Europe. Actually, at first there were all these projections and imaginations and questions people asked me about my identity, again and again, whenever I introduced myself and told my name..."

From the interview with Roza El-Hassan

THE MIDDLE EAST IN FOCUS

As part of the Liverpool Arabic Arts Festival, FACT is showing a series of films curated by Predrag Pajdic exploring the culture, society and history of the Middle East.

The season of short films will be shows as part of SEEN, FACTâs adventurous and experimental film programme, coinciding with Anna Lucasâ exhibition in Gallery 1 & 2, Here and Your Here which contains a new commission documenting an exploration of the deserts of Jericho and Sinai.

The Liverpool Arabic Arts Festival is in its sixth year. Itâs the only festival of its kind in the UK and is a city-wide two week celebration with over twenty events taking place at different venues.

Running from 01 to 15 July 2007, the programme features a host of cultural activity from across the Arab world in the fields of visual arts, poetry, theatre, music, dance, film and food which take place in a variety of venues. The Liverpool Arabic Arts Festival provides a platform for international, national and local artists and communities and is expected to attract audiences, not just from Merseyside, but from across the UK and beyond.

At FACT, SEEN brings The Middle East in Focus with THIS DAY, three special screenings.

Reality Check takes stock of everyday concerns and behaviours such as love, seduction, social manners and gossip. Artist Larissa Sansour will be at the screening to discuss her work.

Replay examines the nature of memory and knowledge. The screening will be introduced by Karen Allen, FACT's Curator of Moving Image.

THIS DAY: Travellers Tales, programme one
The Box 18 July 6.30pm

A programme of short films, which explore travel, migration, borders and checkpoints. THIS DAY Curator Predrag Pajdic will introduce the screening.

AVENGE BUT ONE OF MY TWO EYES

Shot in the occupied territories, Avi Mograbiâs controversial documentary film draws parallels between the Palestinian/Israeli situation today and the enduring myths of Samson and Masada. The film is a powerful and frequently chilling lament of the continuing cycles of violence rooted in the past and threatening to engulf everyone's future. With the roots of so much real-world conflict left unexamined by today's restless media, this film reminds us just how vital filmmakers like Avi Mograbi are.

For more information about the film, please go to: www.secondrundvd.com

Every Sunday at 3 pm, RECOGNISE guided tours will take place at Contemporary Art Platform. Find out more about the concept behind the project, the artists and their works.
Free admission 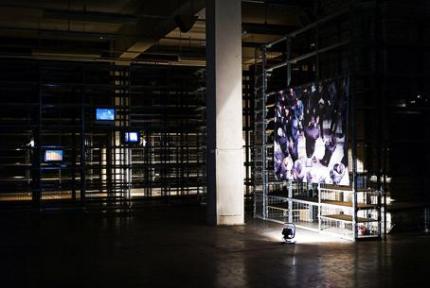 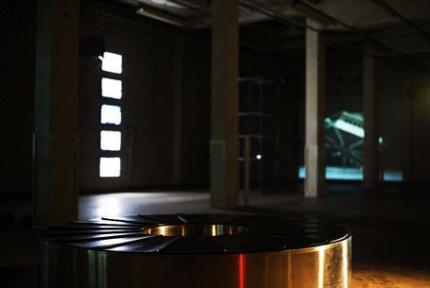 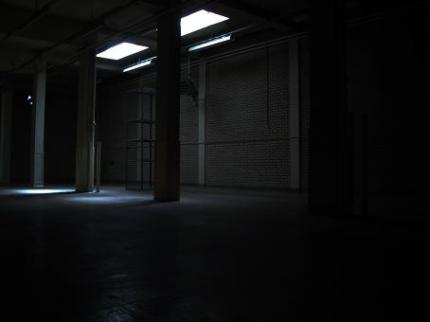 ARE YOU READY TO

If you are, please come to the
opening on June 22nd
7 - 9.30pm with a live art performance by Roza El-Hassan
and interventions by Mohamed Abdulla, Milica Tomic & Branimir Stojanovic
Until September 7th 2007 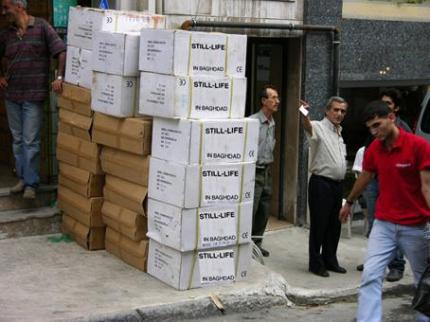 “I find the events are too fast and too close to be able to understand them.”
Artist Ali Cherri on the situation in Lebanon 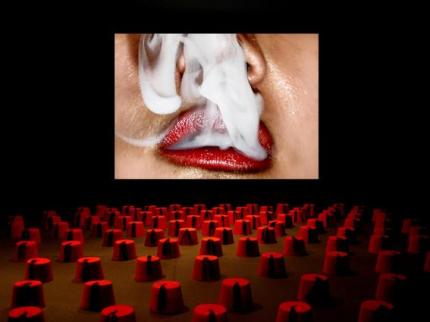 RECOGNISE is a large-scale contemporary art exhibition opening Friday June 22, 2007 at 19:00 in an old warehouse in London's Finsbury Park. It will run until September 7, 2007.

The exhibition gathers a breath-taking range of works by over 40 international artists, many shown for the first time in London, which revolve around the subject of the Middle East. Parallel to the exhibition there will be screenings, talks, panel discussions, performances, and interventions. In the same breath it is the launch of a new contemporary art space in London.

Breathing new life into the region for a media weary audience, the exhibition will focus on a new visual culture of the Middle East, political, to be sure, but where the primary strength lies in the artistsâ work, not in their political or religious views.