Rabih Mroué (lives and works in Beirut) is an actor, director, and playwright.

In 1990 he began putting on his own plays, performances, and videos. Continuously searching for new and contemporary relations among all the different elements and languages of the theatre art forms, Mroué questions the definitions of theatre and the relationship between space and form of the performance and, consequently, questions how the performer relates with the audience. His works deal with the issues that have been swept under the table in the current political climate of Lebanon. He draws much-needed attention to the broader political and economic contexts by means of a semi-documentary theatre.

From theatre practice to politics, and from the problem of representations to his private life, his search for 'truth' begins via documents, photos, and found objects, fabricating other documents, other 'truths': it is as if the work becomes a dissection table for the dubious processes of Lebanon's war society. With the accumulation of materials, a surrealistic saga unfolds, teasing out the proposition that 'between the truth and a lie, there is but a hair'. His piece 'Looking for a Missing Employee' is an investigative performance in which the artist becomes a 'detective' interested in using actual documents to understand how rumours, public accusations, national political conflicts, and scandals act on the public sphere as shaped by print media. Mroué incorporates radical criticism, particularly in his video imagery.

Without losing his peculiar sense of humour, Mroué's 'Biokhraphia' (in collaboration with Lina Saneh) shrewdly provides a space to consider the invention of biography, with all its dreams, failings, and idiosyncrasies, within the frame of the beginning of a history. In 2004 Mroué wrote 'Who's Afraid of Representation', a merging of parallel histories of Western performance art and contemporary socio-political events in Beirut. 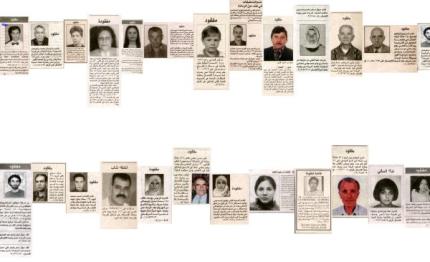 I have been collecting worthless material for almost ten years now, taking good care arranging it, documenting it, indexing it, and preserving it from any possible damage. This material is constituted of cut outs from local newspapers, photographs, interviews, news stories, excerpts from television programs, objects and other things…

Today I possess what resembles an archive, or let's say I possess a real archive that relates only to me: a kind of added memory that occupies different corners of my domestic space, despite the fact that I do not actually need. It is an invented memory that is exhausting me, and which I cannot liberate myself from.

For this reason, I will uncover some parts of my archive, hoping that -by making it public- I can get rid of its weight. This will be my attempt to destroy a memory that doesn't know how to erase itself.